The University neighborhood Denver owes much of its history to Denver University. John Evans founded the school as Colorado Seminary in 1864. The name changed to the University of Denver in 1880. Just a few years later the school was outgrowing its original site at Fourteenth and Arapahoe Street. The board of trustees accepted an offer of 150 acres southeast to move and expand. 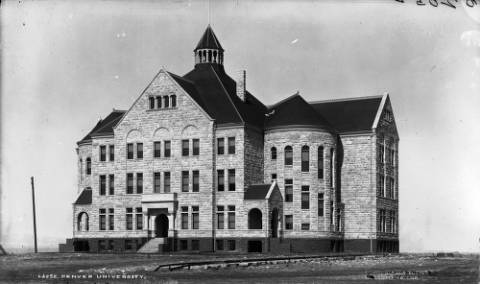 There were conditions to this offer; the land had to be laid out on a street grid with trees planted. Most notable, no alcohol could be made or sold in the area. Gifts of land and cash helped the University holdings increase to almost 500 acres.  At the time University was part of the incorporated town of South Denver. Nearly ten years later the silver crash of 1893 would cause citizens to approve annexation into the City and County of Denver.

The population boomed in University after WW II, very similar to other Denver neighborhoods. Veterans stationed in Colorado decided to relocate permanently. Using GI Bills, many attended DU. The school became known as “GI Tech.” The federal government generously provided funding for construction of permanent housing in the area.

A majority of the population continue to be college students. Close to mass transit, it’s very easy to get around the city. There are still many of the original mid-century brick homes but modern contemporary, new style craftsman and a few victorian styles can also be found.

Where:
University is bounded by South Downing Street to the west, South University Boulevard to the east, I-25 to the north, and East Amherst Avenue/ East Dartmouth Avenue to the south

Who Lives There:
The population is 48% single, 37% married, and 19% of households have children. The Annual Residential Turnover is 27%.

Main Attractions:
Close to Denver University, many parks, and the RTD Light Rail.

Common Complaints:
Many of the homes in the area are used as rentals for college students.