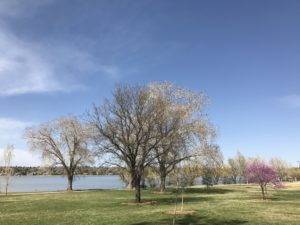 Thomas Sloan and his wife Sarah staked claim to 160 acres of what is now the Sloan Lake neighborhood in 1862. The Ohio couple moved to Denver in 1959, and ran a bar and boarding house on Larimer Street. The lake did not actually exist on the original homestead. Rumor has it that Mr. Sloan dug a well and woke up the next day to a growing lake. He hit a gusher of a natural spring, ultimately covering 200 acres. Now Sloan Lake is the biggest lake in Denver.

Before his death, Sloan platted the area “Lakeville.” In 1881 an amusement park, Manhattan Beach, opened on the north shore of the lake. It featured hot air ballon rides, elephant rides, boating attractions, a dance hall, a roller coaster and more. The park burned down in 1908, replaced later that year with Luna Park. That amusement park closed six years later after great completion from Elitch Gardens and Lakeside Amusement Park.

Sloan Lake is the second largest park in Denver. Attracting many people it boasts, bicycle and jogging paths, boating, fishing, basketball courts, and picnic areas. A scenic neighborhood, it also has an amazing view of the Rocky Mountains.

Main Attractions:
Sloan Lake and Park (the park covers half the neighborhood), close to downtown but still quiet and relaxing.

Common Complaints:
Parking can be hard to find in certain areas, many mordern oversize homes are replacing the quaint victorians.

Public Transportation and Bike Lanes:
Mass transit is primarily buses running the prameter of the neighborhood. The lines include, 28, 28B, 31, 20, 50, and 51.